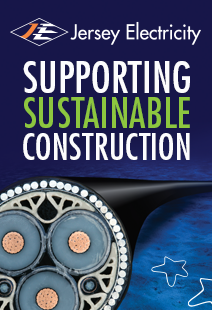 The launch of the 2015 Awards took place on Thursday 19 March at the Hotel de France. Chairman of the Awards sub-committee, David Morris, outlined the award categories for 2015 highlighting some slight changes to some of the categories.  The Young Achiever of the Year award will now be known as Star of the Future and will not have an age limit on entries as it is hoped to encourage other entries that may have been prohibited in past years.  It was also announced that entries for the Sub-Contractor/Supplier of the Year will not only come from entries from within the Project categories but can also be done by self-nomination again offering the ability to any business to enter.

Judging for 2015 will be undertaken by a completely independant panel consisting of Andrew Scate, Professor Ed Sallis, Mike King and new to the panel Tammy Fage and Graeme Smith and part of their role will include interviewing candidates for the Star of the Future category and Industry Achiever category.  The panel will also have the opportunity to visit, where appropriate, projects that have been entered to see for themselves the end result.

Key-Note speaker for the gala event was announced as being Miles Hilton-Barber a truly inspirational speaker who has achieved so much despite his ability of being blind - a speaker not to be missed!

All details of the award categoreis, judging and the gala event are contained in the 2015 Toolkit that can be viewed by clicking on the link below.

Start the process of entering the 2015 Awards by completing the Nomination Form below.

Tables can now be booked for the gala event by contacting Caroline Harrington at [email protected]  Tables are for either 10 or 12 people at a cost of £80 per person.  Tables are limited so early booking is recommended